Based on my presentation on 6 May, 2010 at the Finlandia Hall in Helsinki for the XXXII Finnish Housing and Planning Conference.

Is it wise on the long term (considering 30 years and beyond) to renovate housing areas as the one described in my case example, and thereby keep existing situation unchanged for tens of years?

Could other solutions be found which would allow us to create a clearly higher standard housing environment, at the same cost?

This presentation is “interdisciplinary” as it looks at the issue from various different angles with focus on the cityscape, the building economy, the housing design, the city structure and ecology. The presentation is by no means inclusive as generalisations and exclusions have been necessary due to limited resources. This means that the economic calculations presented, for instance, are only indicative and exclude potential zoning fees, taxes, capital costs and entrepreneur’s profits.

The calculations are based on the idea that the new buildings would be passive houses and parking would be underground. 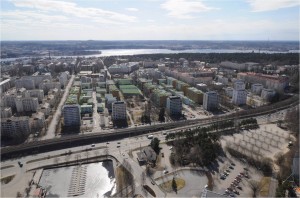 My idea is that the present inhabitants would invest into the new housing company the same sum of money that would in any case be required for the renovations of the buildings. They would benefit of the resulting increase in value. When we calculate the price difference between the current market price and the new, higher standard housing and add to that the mentioned renovation cost, we could buy a new apartment of the same size but clearly more valuable and of higher standard. Its operating cost would additionally be clearly lower than that of the current housing.

The efficiency of the area as well as the prices of the flats per square metre would go up considerably whereby the complex would represent such economic value potential that housing companies and property developers would without a doubt be interested in it. The public sector would, no doubt, also be interested in this project.

My idea is being further developed by arch. student Timo Vahteri in his master’s thesis.

The Finnish Housing Fair has sponsored this master’s thesis completed under the guidance of professor Markku Hedman. The attached presentation materials were produced for my use by arch. student Vahteri.

The slide show will clarify the main points of the idea and the project proposal.

This site uses Akismet to reduce spam. Learn how your comment data is processed.